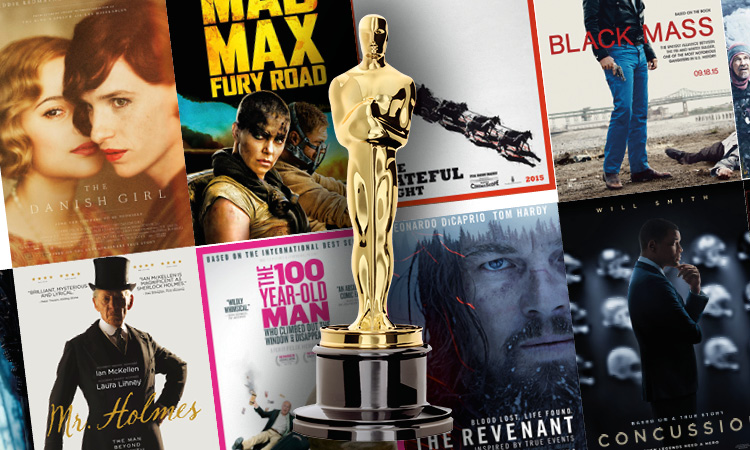 It is that time of year again when all the greatest actors, film makers and story tellers, gather together in their best designer garments to grace the red carpet for the biggest award ceremony of the year; it’s Oscar season.

It is no surprise that like most film lovers, we at eXPD8 find ourselves biting our nails and taking bets for who and what we feel will take home the coveted golden statue.  Will it finally be Leo’s year to win?  Or will he be “snubbed” for a 5th time?  Here is eXPD8’s breakdown of nominees and our best guesses of who will snag themselves a golden man.

Starting with the biggest category first – Best Picture.  With ‘The Revenant’ achieving the highest number of nominations of all time (12 nominations), we would like to say it’s a safe bet that it will win the 2016 Best Picture title.  From the film’s editing, acting, sound mixing to screenplay it appears to be praised for it all.  But there is always the chance of an unexpected plot twist and have an underdog steal the show.  ‘Spotlight’ may end up being ‘the little indie that could’ and steal the show from the large studio favourites.  Maybe ‘Mad Max: Fury Road’ will destroy all other challengers; it certainly excited our team after supporting the launch in October!

Next in the docket is Best Actor.  Of course we at eXPD8, like most Leo fans, feel that Leonardo DiCaprio is long overdue an award.  But with his other challengers, such as Eddie Redmayne who took home last year’s award for his magnificent performance in ‘The Theory of Everything’, the competition is strong.  Michael Fassbender was highly praised for his work in ‘Steve Jobs’, as was Matt Damon in ‘The Martian’.  Needless to say, there is still a chance Leo may have an empty Oscar cupboard for another year running.

The competition for the Oscar Women is going to be equally as tight as the men’s.  Critics argue it is going to be a battle royal between Brie Larson for ‘Room’ and Saorise Ronan for ‘Brooklyn’.  Although the fan favourite Jennifer Lawrence, who is up for her second nomination in ‘Joy’, isn’t favoured to win, she could always trip up the critics and steal the spotlight.

Finally we come to the category of the mastermind behind all the great films, Best Director.  Rolling from his success from his last year’s win with ‘Birdman’, Alejandro Gonzalez Inarritu (‘The Revenant’) is surprisingly not the frontrunner for this category.  George Miller is predicted to take home the coveted title for his gripping and white knuckle interpretation in ‘Mad Max: Fury Road’.

Guess as we might, no one will know the true winners until the golden envelope is opened; unless Olly Murs is hosting.  We will have some very sleepy colleagues in the morning of February 29th, but it is all part of the Oscar magic.  Happy awards season everyone, and may the odds be ever in your favour.