London, July **, 2018: Year-to-date figures show consumers continue to view ownership as an important part of their consumption of screen entertainment, with more than 38 million copies sold across DVD, Blu-ray[2] and digital formats so far in 2018, the British Association for Screen Entertainment announced this week. 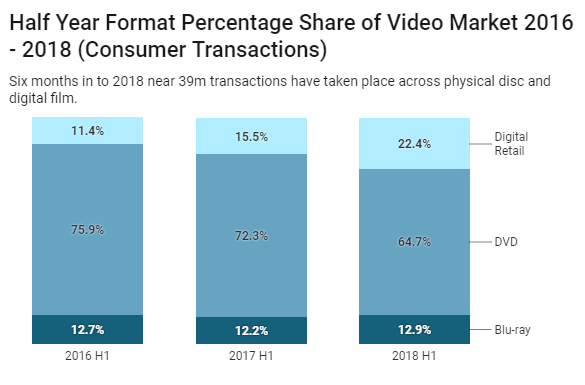 With a wealth of box office success stories and critically acclaimed TV shows transitioning to home entertainment formats, new release titles account for 44 per cent of transactions, marking a three-point rise compared to the same time in 2017.

Twentieth Century Fox’s The Greatest Showman leads the charge, with Hugh Jackman’s lavish tribute to PT Barnum seeing more than 1.4 million copies roll up and roll out on disc and digital formats. Other notable successes include Star Wars VII – The Last Jedi, selling more than 1.03 million copies across formats to prove that the force is still strong with The Walt Disney Company, and StudioCanal’s favourite marmalade-eating bear who has found a home with more than 835,000 families thanks to the critically adored Paddington 2. Dwayne ‘The Rock’ Johnson continues to charm his way into homes too, with the unstoppable Jumanji: Welcome To The Jungle seeing Sony Pictures Home Entertainment sell more than 600,000 copies since its release in April. The Marvel Cinematic Universe continues its success story for Disney too, with Black Panther delivering sales in excess of 513,000 across owned formats for the studio.

Within these success stories, the digital transactional market continues to engage both new and returning customers, with electronic sell-through (EST), or Download & Keep as it is increasingly known, seeing strong year-on-year growth of 27 per cent across the ecosystem of digital retail platforms now offering this method of ownership. Further, average consumer spend across EST is also increasing, with a year-to-date increase of eight per cent taking average spend per buyer to £31.50[3]. 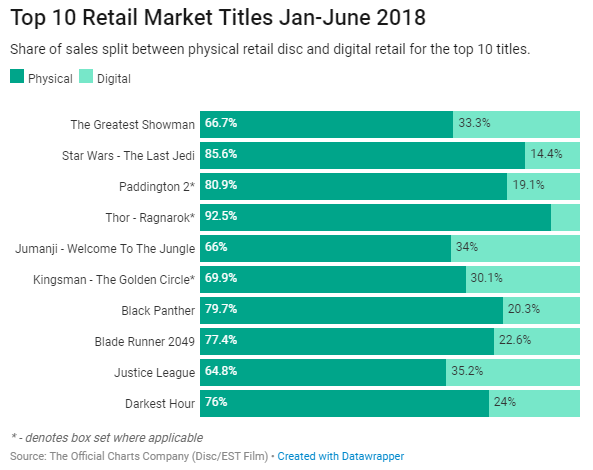 With a sustained flow of theatrical titles arriving on home entertainment formats, the cumulative performance of the top 10 new release titles in 2018 has so far contributed 7.2 million to the total number of copies sold, an increase of eight per cent year-on-year. The growth in the performance of the top 10 has been fed by a 21 per cent uplift from the digital top 10 but also by a five per cent rise in physical disc sales across the top 10, further underlining the diversity of access to owned content the category now offers.

The story isn’t just one of new release content, with consumers engaging with a breadth of catalogue titles at different stages in their lifecycle. Indeed, catalogue sales still account for more than half of the ownership market, and catalogue content less than 12 months old has so far enjoyed growth of four per cent year-to-date, so while it is evident that there is a range of ways to find older content, ownership is still an important factor when it comes to curation and collection.

Customers are also continuing to enjoy the range of benefits offered by premium physical format, 4K UHD. The ultra-high-definition Blu-ray format has seen more than 250 titles released since coming to market in 2016, with every release in the year-to-date top 10 also releasing a 4K SKU and contributing to the fact that 4K UHD now accounts for a growing 12 per cent of the Blu-ray market. Further, consumer spend within the Blu-ray market more broadly has increased by three percentage points to 25 per cent share of market year-to-date[4], with the average price of Blu-ray discs also increasing by 7.8 per cent, lending support to the fact that, increasingly, more and more film fans are prepared to pay extra for a premium viewing experience.

Liz Bales, Chief Executive at BASE, said: “So far 2018 has seen the home entertainment sector benefit from consistently strong performance across a broad range of titles, with films like The Greatest Showman and Paddington 2 underlining that audiences remain engaged with the category even as it adapts to changing viewing habits and tastes. Whether you consider the performance of the top 10, the rise in digital transaction or the increased consumer spend on high definition Blu-ray and 4K UHD titles, there is much to suggest that being able to access a film in your home first and in the best possible quality remains important to many, and so we look forward to an even richer slate of prospects as we move into the second half of the year.

Robert Price, Chairman of BASE and Managing Director, Twentieth Century Fox Home Entertainment, said: “There is much to be positive about when considering the performance of the home entertainment sector so far in 2018, especially in the context of a challenging trading environment and unsteady consumer confidence. As an industry we must ensure our relevance to audiences sustains. We need to capitalise on successes where we see them and be bold and collaborative in approaching challenges and meeting the needs of a customer base still clearly very much in love with ownership and collection. Premium experiences especially deliver to the category the opportunity to stand apart from other options in the entertainment sphere, as do digital curation and a preparedness to trial new and forward-thinking models that place that curation at the heart of audience engagement with our products.”