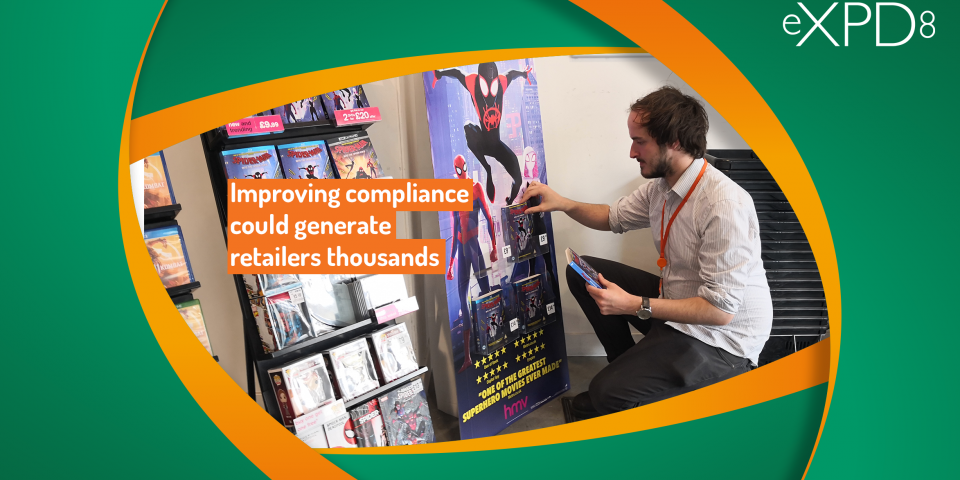 Research carried out by retail support services specialists’ eXPD8 has revealed that compliance in store can increase significantly when POS units are ‘walked in’ rather than sent into stores direct. According to the research, compliance was in fact 20% higher where POS units were walked in by eXPD8’s merchandisers.

The company, which is head-quartered in Bristol, have analysed results of 53 of their own launch set ups, across 8,590 stores and have concluded that non-compliance in store, as a result of lost or damaged POS, could result in thousands of pounds worth of missed sales for retailers, this is based on a loss of £54.96 per store. Other findings also show that, for launches of a similar scale, when units are walked in, compliance increases dramatically with around 95% of all stores being compliant.

This compliance uplift is then likely to naturally drive sales further and increase profitability. However, aside from the financial argument, walking in POS units also offers retailers and suppliers a range of other benefits. In fact, the process saves wastage of POS, a unit alone can cost up to £200, and reduces the difficulty in accessing and locating the units. This can prove extremely useful, especially during busy seasonal periods, such as Easter and Boxing Day for example, when countless amounts of different displays are all delivered at the same time and stored together.

Consequently, eXPD8 recommend that POS should be walked in, where feasible, rather than sent into stores through direct channels as this will help prevent considerable losses of money, both from missed sales and wastage. Engaging a retail support services agency will facilitate the process as their experienced merchandisers will be able to work alongside store colleagues, offering a strong and efficient support system especially during busy seasonal periods or big launches. A retail support service agency, such as eXPD8, is able to advise on which POS strategy is preferable and also embrace being the Middle Man – liaising with POS agencies on behalf of the retailer and supplier for all relevant launches and activities.

Kelly Harrington, Head of Catalogue & Customer Marketing at Universal Pictures said: “POS is an integral part of our in-store promotions and so getting it right is absolutely essential. We used to have all our POS delivered directly in-store however this often came with challenges such as; the risk of damage or difficulty in locating. eXPD8 have offered first class advice and we saw a dramatic increase in sales by switching to walk in POS processes.  eXPD8’s understanding of retail systems has been a tremendous help for us and we very much see them as a crucial partner in the future success of our business in the UK.”