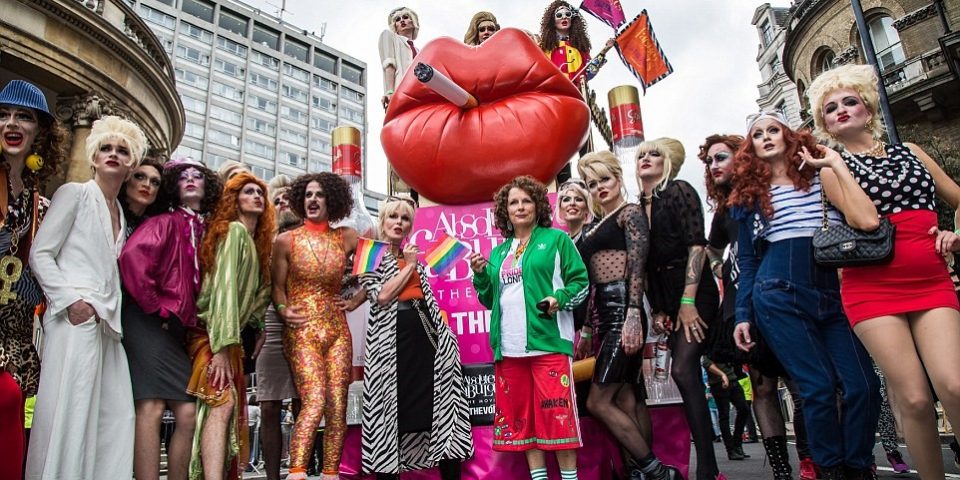 With Pride season breaking into full swing seeing London and Bristol pride taking place this weekend! It’s time to don your rainbow flags, fancy dress and as much glitter as humanly possible without looking like Goldfingers Golden Girls!

Pride is a celebration of equality, diversity and creativity that is recognised the world over. These celebrations were born from a time of anguish and struggle for many, where the basic human instinct of falling in love was not an option granted to most. Even though Pride is seen as a time for celebration for many around the world this struggle is still very much real. It is for this reason that these events have now found their way into mainstream media such as TV and Film.

The Matthew Warchus film ‘Pride’ (2014) launched the LGBT+ community into the public domain and became a highlight of the cinematic year. Suddenly people became more understanding of the reasons why LGBT+ Pride is such an important fixture in modern culture both outside and within the LGBT+ community. As a member of this community myself it’s easy to get caught up in the party atmosphere and forget the reasons why we march or celebrate our individuality. For me Pride is not something to be saved JUST for the LGBT+ community it’s a chance for everyone to find pride in themselves and celebrate who they are, and who they love no matter what your orientation.

More recently we have seen the smash hit ‘Moonlight’ (2017) storm the Oscars being the first LGBT+ and all black cast movie to win best picture at the Oscars. ‘Sense8’ a Netflix series that is already achieving cult classic status is tackling huge subject matters that not only affects the LGBT+ community but also injustice that is happening the world over. Unfortunately due to large production costs the series has been discontinued however a final 2 hour episode has been announced to bring a conclusion for fans all over the world. In the world of entertainment we are excited at the prospect of what is to come in the world of LGBT+ TV and Film.

Over the years a number of movie stars and celebrities have taken part in marching in support of equality, diversity and acceptance. Ian McKellen our very own Gandalf has supported and marched for ‘legal and social equality for gay people worldwide’ for many many years and will likely be seen at one or two of the bigger Pride events this year. In 2016 we saw one of the most anticipated films of the year open the London Pride parade, Ab Fab the movie with Jennifer Saunders and Joanna Lumley leading the way. Saunders later tweeted ‘So proud to have cut the rainbow ribbon of Pride London. Love all you Eddys and Patsys. Be Proud! #Pride2016’ the influence of role models such as this is unprecedented and brings to reason why more LGBT+ subject matter should be celebrated and documented by this medium.

Being part of the LGBT+ community myself it is important for me to work for a company that embraces and supports its employees no matter what their orientation, race, religion or creed. From the moment that I joined eXPD8 and the first Friday night at the pub both my partner and I were welcomed with a smile and an open heart. eXPD8 truly are an organisation that values equality, diversity and creativity which makes working for them even more enjoyable.

So wherever you are in the world grab the person you love get to your nearest Pride event and show the world how much you love them .

‘Look, love is not something we wind up, something we set or control. Love is just like art: a force that comes into our lives without any rules, expectations or limitations. Love like art, must always be free’ – Hernando, Sense8