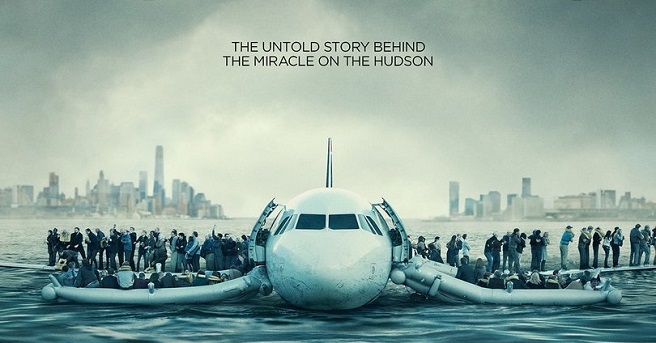 A few months back over the Christmas holiday, myself and the family took a trip to the cinema to watch Sully: Miracle on the Hudson. Bearing in mind 5 out of the 6 of us were soon off on transatlantic flights, it may not have been the best choice of film, however it did not disappoint!

The film is based on the real life events that took place on 15th January 2009 when Captain Chesley ‘Sully’ Sullenberger landed a plane on the Hudson River after being struck by a flock of birds causing both engines to lose thrust. The film looks at the moments leading up the crash and the aftermath with a heavy focus on the affect that it had on the plane’s captain, Sully. Tom Hank’s fantastic portrayal really captured the torment and pressure Sully must have felt when he had the investigators trying to prove that he made the wrong decision in landing the plane on the Hudson.

I particularly enjoyed the part of the film where they created a flight simulation of the crash showing the short time frame that Sully had to make a decision and risk the lives of all those on board. The film looked at how trying to analyse a decision through a simulation is never going to be same as a human making a split second decision under extreme pressure. Portrayed as a modest hero, the film looks at how Sully is not just a hero for landing the plane but also heroic for standing up to the board of investigators trying to cast doubt on his decision.

Not knowing much about the real-life crash prior to watching the film meant that I went into it with an open mind with no pre-conceptions about the event. I left the filming wanting to know more about what had happened as well as how it affected Sully and his aviation career. Overall it is definitely worth a watch and will open your eyes to the impact a split-second decision can make on your life and those around you.

The film is now out on DVD, Blu-ray™ and 4K  for you to purchase and  I would definitely recommend you get yourself down to a store and buy your copy straight away!