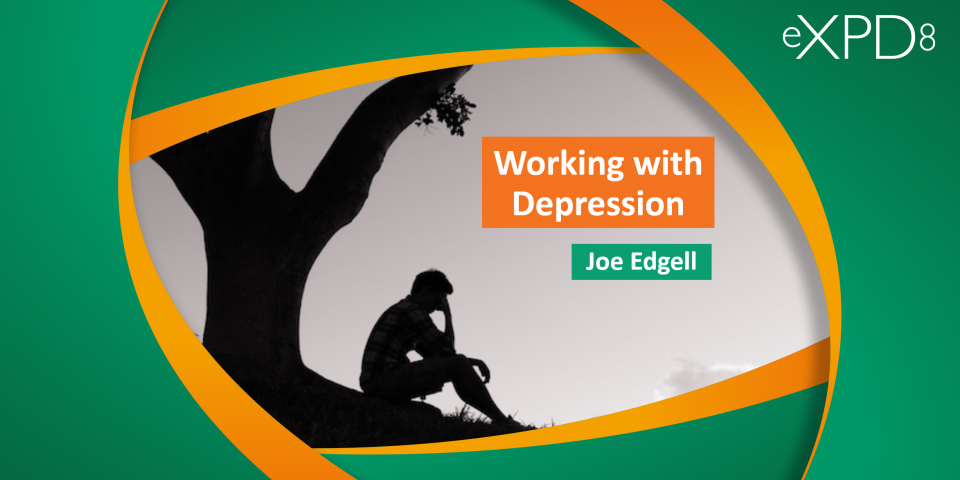 Hi, I’m Joe, an IT administrator at eXPD8. I’ve been working here for about 3 months so far and I am very thankful – but it wasn’t always rainbows, happiness, and tablet builds. Let’s go back to a much darker time before I was graced with the bright, orangey light of eXPD8… I’m talking about working with depression.

My story, like most stories, starts with a great evil. It’s name was depression. About 6 years ago (at the time of writing) I was diagnosed with depression and anxiety due to trauma. Said trauma was caused by being pretty nastily bullied at secondary school. I managed to survive GCSEs and A levels until I had the same misfortune happen to me once again at my first job; I was bullied, shouted at, and ridiculed by my boss at the time on a day-to-day basis.

The dark, looming shadow of depression has been with me ever since secondary school, but it wasn’t until that first job that it pushed me so far to the edge that I felt the need to seek professional help – and I did. I’m so glad I did. I left that awful warehouse job and focused on trying to better myself. Since then I’ve been on a lot of courses, therapies, medications, and I’ve learnt so much to get to where I am at today. It felt like an impossibility at first, even just initially opening up to my parents about my issues.

So, why am I mentioning all this bad stuff from the past? I assure you there is (hopefully) a point to all this rambling. A couple years ago I was really struggling with everything – I hit a brick wall with getting help with my mental health, I was struggling to find another job, losing interest in a lot of the things I used to enjoy; I was just getting worse and worse. I fell back again into an even darker place.

But then a tiny glimmer of light flickered into existence in the form of a silly, little mobile phone game – Pokémon GO. I know that sounds daft, but please bear with me on this! The game got me leaving the house regularly (which was something I found super difficult at the time), socialising with people, getting exercise, seeing new places; it even tied in with my CBT (Cognitive Behavioural Therapy) as a form of ‘grounding’ myself to the present. I’d often get ‘stuck’ in the past, dwell in flashbacks of the negative experiences I had years ago, the game helped me focus on the here and now.

This is where my journey to joining eXPD8 technically began. About a year or so into Pokémon GO’s release they brought out Raid Battles – a group activity where players have to meet and team up to take down a boss Pokémon together. This is where I met our resident IT administrator you all probably have come to know and love: Jack Bailey. I thought he was a proper weirdo at first, as most probably think, but he eventually became one of the best friends I have had the great fortune to get to know.

In October 2018, Jack offered me a part-time temp job to help with how busy the eXPD8 IT department was during Quarter Four. I was still struggling to find work at that time, but I had qualifications, some experience in IT and I had been trying to get into an IT role for a while. So, it seemed like the perfect timing! However, given the horrible experience that was my first job, I was quite scared about starting a new job, even with Jack there with me. I was terrified of history repeating itself, getting bullied once again, and I was worried that my mental health issues would affect the role…

However, I couldn’t have been more wrong, starting at eXPD8 has been such an amazing breath of fresh air! Everyone is so nice, and I really appreciate the welcoming atmosphere. No one has shouted at me (yet!). But seriously, working at eXPD8 has made such a wonderful improvement to my mood. I was doing an anxiety course with Connect Psychology alongside working part-time here for the first couple months of my contract.

I found it very beneficial doing both at the same time as it helped push me to become better with so much going on. I wanted to do the best I could as I wanted to help Jack and the IT team as much as I possibly could. Also a big thank you to my Line Manager, Paul Roffey, who was so cool and understanding about my issues and doing the course side-by-side.

“It has been wonderful to watch Joe grow in confidence during his time with us at eXPD8, from the timid person I first met; to someone who is articulate and confident in his work.  I’ve been particularly impressed by Joe’s desire to learn and to find solutions to problems, and his ability to cope with potentially stressful situations.  It’s eXPD8’s gain that Joe is now with us on a permanent basis and I look forward to us working and progressing together.”  Paul Roffey, Finance and IT Director

Working at eXPD8 has given me the stability and focus I’ve been looking for. An example of this is that quite recently I went through a bad breakup. She left me for selfish reasons, treated me badly, and she never really understood or supported me with my mental health problems. If I didn’t have that stability and support that this job now gives me, I dread to think of the state I would’ve been in without it. It has allowed me to move on just by having a job to do, a place I feel safe, and all the responsibilities that come with the role.

I’m still not 100% yet, I’m still on antidepressants, I still have issues to deal with and demons to face. As is the case with depression and anxiety, there will always be ups and downs. I’m trying my hardest to become the best possible version of myself – and I feel I am getting there, more than ever now because of working at eXPD8 with all the positivity here.

For the first time in a very long time I am actually looking forward to the future. I hope I finally have a future. Being made permanent was the best news I have had in ages. This is an opportunity I will give my all and learn as much as I can. If you made it this far, thank you for reading. This has been very cathartic to write all this out – putting my journey, thoughts, and experiences into order. That tiny flicker of light has turned so much brighter and I will do everything I can to keep the flame alive.